AM I CHOOSING THE RIGHT POWER?

When we speak about optimising the electrical power the question that comes up is: am I choosing the right power?

The comparative analysis between the power hired and the power used should be a fundamental task for businesses. This analysis can reduce the power bill between 5% and 25% like in the case here presented. 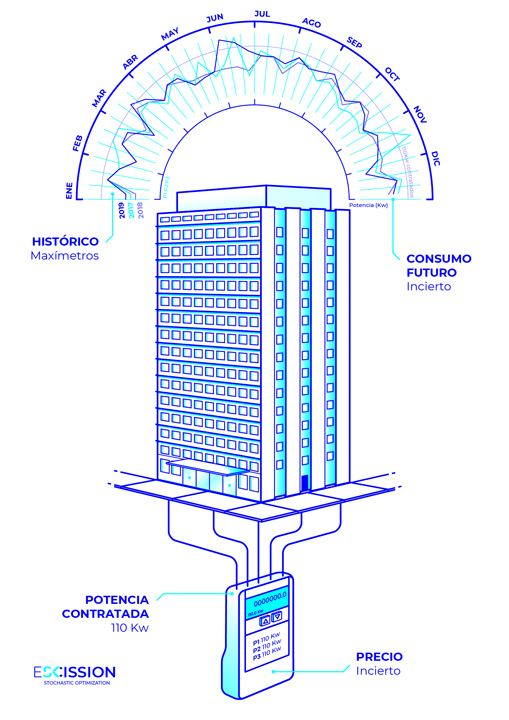 In 2013 all energy distribution companies in Spain required all their customers to sign for a specific electric power in their supply points. Depending on the power hired, they charge a fixed amount. This is known as the fixed power fee, that has been increasing, becoming a burden in the electric bill (read related article here).

Escission is not an energy retailer. Therefore, the efficiency analyses carried out are completely objective, ensuring the customer will be able to make the most of their energy bill.

We look for an answer to these questions:

The aim of this project was to minimise the cost of the energy bill, by decreasing the fixed power fee, while maintaining the service to the dependent premises and without incurring in excessive usage that would in turn penalise the customer.

We need to bear in mind that the power required in the premises must sit between the 85% and 105% of the power hired. According to the R.D. 1164/2001 (Spanish Legislative Royal Decree), in which a series of brackets are fixed for the 3.0A tariffs. For example, if the potentiometer shows:

The customer originally had the following arrangement of electric power:

We assume the following rates for each of the brackets:

With this distribution, the fixed power fee was an average of 8793,01 €/year

What are the alternatives for the customer to save in this fixed fee?

After analysing the historic data provided by the customer, we concluded that there were two possibilities depending on their risk profile:

This is the formula used by most of the energy efficiency companies when they offer a consumption study. The issue with this setting is that the savings are not ensured if:

*(The full report can be accessed at the bottom of the page)* With this formula the average saving is up to 458,77€/year, slightly less than the deterministic approach; however the risk of incurring in losses if the hired power is not changed is lowered. If the customer is risk averse, the best option is to select the alternative that does take into account the variability. If the customer is willing to take more risks, the determinist alternative could also suit them.

In both cases the alternatives are more beneficial than the current situation, saving around 6% on average.

An additional advantage of the proposed methodology is that we can suggest changes in the hired electrical power for customers that had solar panels installed. With past weather information and the characteristics of the system installed, we can add that information to the historic usage data and select the most suitable power in the new configuration, without having to wait one or several years to have enough data.

In order to understand how the adjustment methodology used in this project, you can access the article used as a reference.

Please, note the original article is written in Spanish. If you cannot read Spanish, no worries, please contact us and we will be happy to discuss with you in English.

Project: Analysis of the potential reduction of hired electrical power

Download our full report about Power Optimization: what power should I hire?

Download PDF
Energy
Escission uses its own and third-party cookies to collect information that helps improve the experience. By clicking Accept you accept our Cookies Policy.more informationAccept
Cambiar consentimiento

Any cookies that may not be particularly necessary for the website to function and is used specifically to collect user personal data via analytics, ads, other embedded contents are termed as non-necessary cookies. It is mandatory to procure user consent prior to running these cookies on your website.